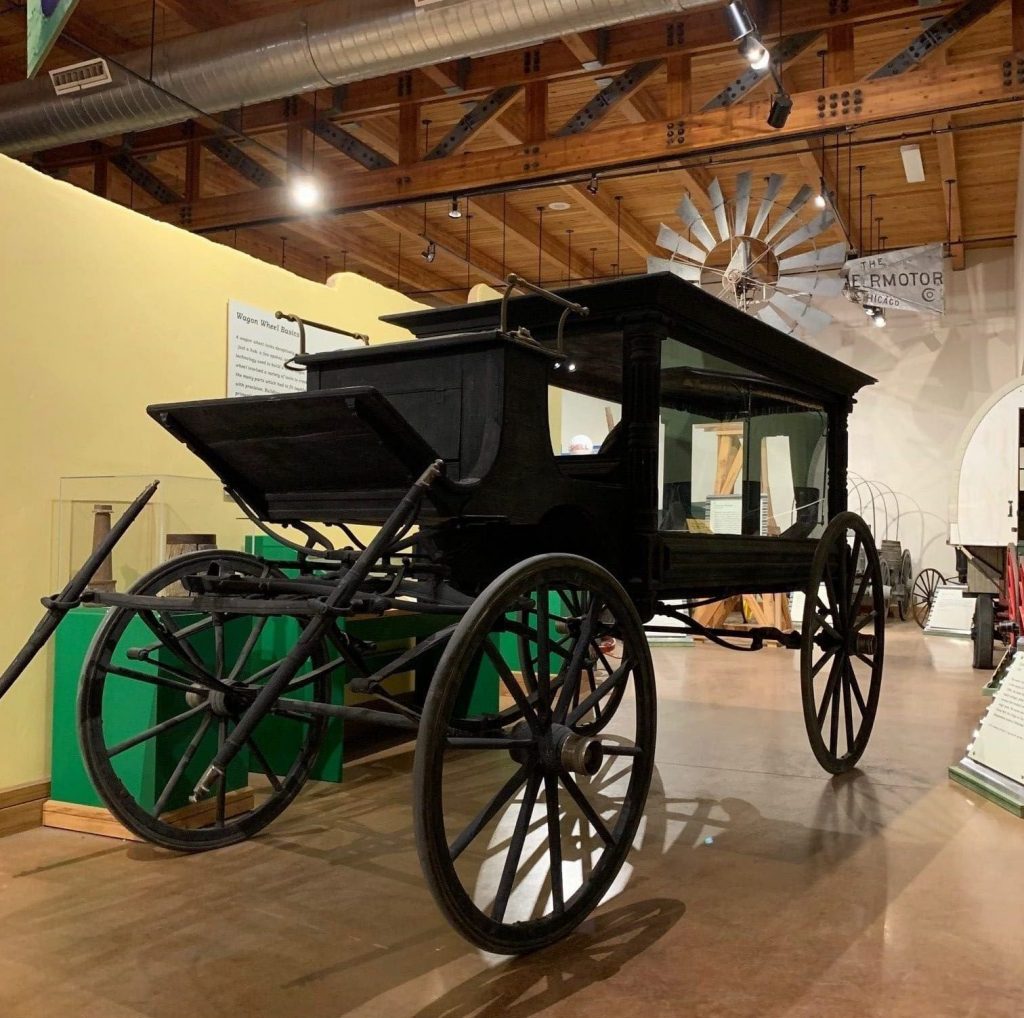 LAS CRUCES – The New Mexico Farm & Ranch Heritage Museum is the new — and perhaps final —  home of a historic hearse that was used in Las Cruces from 1894-1912.

The horse-drawn wagon is known by many as “the Pat Garrett hearse” or “Pat Garrett’s Last Ride” because it likely delivered the famous lawman to his Las Cruces grave in 1908.

The late local historian, Cal Traylor, purchased the hearse from a museum in Pinos Altos, N.M., and donated it to the Dona Ana County Sheriff’s Department Historical Museum of Lawmen in 2012. The small museum recently closed and its artifacts have been dispersed to various agencies for preservation. The Sheriff’s Department delivered the hearse to the Farm & Ranch Museum on Wednesday, Aug. 26.

“We are very appreciative to the New Mexico Farm & Ranch Heritage Museum for taking this important piece of our history,” said Dona Ana County Sheriff Kim Stewart. “So many more people and generations will get to see it here. I love history and this needs to be preserved and displayed in something that’s more than an office space.”

The Farm & Ranch Museum, which is temporarily closed due to the COVID-19 pandemic, is well equipped to preserve the artifact and showcase it to the public, adding it to its large collection of wagons, carriages, and buggies.

“We are grateful that the Sheriff’s Department saved this historic piece through the years and we are happy to have it as part of our collection,” said Holly Radke, Curator of Collections at the Farm & Ranch Museum.

Garrett was probably one of many prominent Las Crucens that the hearse carried. Garrett, best known for killing Billy the Kid in 1881 when he was sheriff of Lincoln County, later became sheriff of Dona Ana County. He was shot to death east of Las Cruces in 1908.

According to the Farm & Ranch Heritage Museum’s Curator of History, Leah Tookey, the women’s Improvement Association (WIA) of Las Cruces purchased the wagon in 1894. When the WIA was still in its infancy, members decided there should be a more dignified way of conveying the recently departed to their final resting place, (previously an ice wagon was used for this task) so they purchased an old horse-drawn wagon they found on a ranch near Las Cruces. It was painted gray and the cab had been removed. Chickens were roosting in the cargo bed.  The ladies of the WIA had the hearse shipped by rail into the city where it was restored by Jack Fountain.

The hearse could be rented for use by anyone who lived in Las Cruces for the price of $10 – $5 of which went to the local livery stable to pay for the horse, driver, feed, etc. There is no doubt that many famous Las Cruces residents took their final ride in the hearse as it was the only one available until 1912 when Thomas Graham purchased a new horseless hearse for use at his funeral home.

Later, this hearse was purchased by the Amador family and even later a rancher named Ollie Isaacks. He took the cab off of the wagon again and used it as a farm wagon during World War II when gasoline was expensive and hard to get.  Later Bob Stepp bought it and intended to put it in his museum of Southwestern New Mexico history. When Stepp’s plans for a museum fell through he sold it to Frank Tatsch who put the hearse back together, reinstalled the glass windows, velvet curtains, decorative corner posts, and replaced the rubber that covered the steel-rimmed wheels.

The New Mexico Farm & Ranch Heritage Museum in Las Cruces preserves and tells the story of 4,000 years of growing food in this region. Its mission not only includes farming and ranching, but also rural life. The Museum is part of the New Mexico Department of Cultural Affairs.