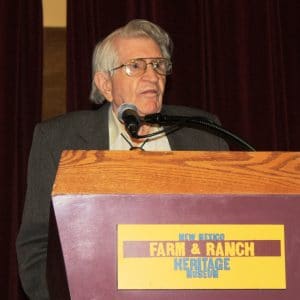 Max Evans, who passed away on Aug. 26, 2020, at the age of 95 will be greatly missed by so many. He was many things to many people and was truly a New Mexico legend. He was an award-winning author, a screen writer, an artist, a cowboy, a soldier, a miner, a husband, a father, and a great friend.

For the New Mexico Farm & Ranch Heritage Museum, he was one of our early supporters, attending countless meetings before the Museum was built and serving for 16 years as a board member for the Museum and for its Foundation.

In 2014, we were invited to write an essay for a 90th birthday book called “Max Evans & a Few Friends.” Below is that essay:

A doctor who raised cattle and an anthropologist who curated exhibits were engaged in a deep discussion in the main gallery of the New Mexico Farm & Ranch Heritage Museum. Expertise was being tossed back and forth between the two men who had a lot to share about their respective fields.

There was a lot to be learned by anyone willing to sit and listen. Just a few feet away was Max Evans … sitting and listening.

It was the first time I had ever been around Max and I don’t think I’ve never seen anyone absorb information and observe as intently as he did that day in 1999, a year after the Museum opened in Las Cruces.

I don’t know whether or not Max was a good student in the restricted confines of the classrooms while growing up in Eastern New Mexico and West Texas, but I know he has excelled as a learner and achiever in a world filled with big dreams, great ideas and fascinating subjects.

A gifted author and storyteller and an accomplished painter, Max knows many subjects well, partly because he has lived many of them. And when he’s not living them, he’s reading about them or listening.

A particular area of expertise for Max is people. His ability to quickly determine the character or honesty of a person has served him well over the years. Those who pass his intuitive examination become lifelong friends. He has many of them.

One of those friends was Frank DuBois who invited Max to an informal meeting in 1987 to discuss the creation of an agricultural museum in New Mexico. DuBois was Assistant Director of the New Mexico Department of Agriculture at the time. As the process of creating the Museum continued for the next several years, Max attended meetings with government officials, academic leaders, farmers and ranchers, and basically “kept my mouth shut.” Mostly, he listened.

Eventually, Max began to share his opinions about the endeavor and his common sense was critical in helping navigate the project through countless potential land mines. Reading through a 1996 oral history interview that was conducted with Max as the Museum was being constructed, his humility shines through as he gives credit to many of the other founding members for their determination and intelligence. But it’s apparent that Max pushed them to think big.

“This had a chance to be an international draw, far bigger than most museums can have,” Max said in the 1996 interview. “It is just that I love it, and I’m going to keep driving at them. Every time they have a meeting, I’m going to try to make them think international concept.”

Max, who pushed for the Museum to be built in southwestern New Mexico near New Mexico State University, believed that the state’s unique agricultural history – one that goes back thousands of years and features such diverse storylines – would be a huge draw.

“They can come see something they cannot see anywhere else on the face of the earth, and by gollies, it worked,” Max said. “When you have something no one else has ever seen, they’ll talk about it.”

Max, who served on the Museum’s Foundation Board for many years, said the stories the Museum tells are a mix of “romanticism” and “a grinding son of a gun.” His “number one goal” in 1996 was the “education of the children … and if you educate them properly, they are going to know what they see here is the truth and that will be carried on.”

Eighteen years later, the Museum has become “international,” drawing visitors from nine different foreign countries during a four-month survey period recently. The Museum also is a big hit with school children throughout the region, with thousands touring and learning each year.

The vast gallery where Max sat and listened to the two men years ago now is called the Heritage Gallery. It’s a lively mix of stories, artwork and objects that take visitors from the beginning of agriculture 4,000 years ago with the Native Americans, to the arrival of the Spanish, to the 20th century and beyond.

It’s a great story — one that Max saw from the beginning and knew needed to be shared.